We are four days into the new year as I begin this rambling, and I can almost guarantee that we will be five days in by the time I post it.  Not because I will be burning the midnight oil to write it - quite the opposite in fact.  It has been a long day, I am exhausted, and I still have much to do before I can sleep.  Nothing serious, just the small yet necessary things that accumulate during the hours of the day, building in the corners like particularly obstinate dust bunnies.  Things like digging my bed out from beneath the pile of laundry and notions which I kept leaving on it.  Trivial tasks, but not lacking in significance.

I feel a bit odd, my minions.  2013 was a pretty good year for me, overall.  It was not perfect, but nothing is.  However, a lot of good things happened.  It was the first year in our new house, and while that brought its own challenges it also made those challenges worth it.  I love having a home that's mine.  I love feeling like what I do to it matters.  I love being able to paint the walls any color I damn well please.  In addition to the house, Beasty got a promotion this past June that saw him in a less mind-numbing line of work that paid better, so that was also quite good.  Still the same company, but what can you do.

2013 was also a rewarding year as a mother.  We got the not-so-wee demon into Track & Field, and then later Cross Country, and it was very good for him.  It was work, but worth it.  The still-a-bit-wee demon got to see a specialist, and so got the assistance she needed for school, and is now doing so much better than she did last year.  Her first quarter report card almost made me cry, I was so heartened by her progress.

The point I'm making is that I wasn't in a hurry to shove the old year out the door like I have been in the past.  Granted, it's been a few years since I muttered the infamous phrase of "I'm so glad 20-- is over," but 2013 in particular saw many good things.

I think part of my problem is that the last week of 2013 brought news that colors the coming year.  You will have to forgive me, but I'm going to be aggravatingly vague about what the news was.  It is not my story to share.  Like most people, though, I am a character in others' stories, and so the news affects me.  Let us just say that it took a bit of the shine off the new year before it even began.

And so I sit, a bit pensive, very thoughtful, and I consider the year stretching out before me.  It's a bit tarnished, but if the Steampunk fashion movement has taught us anything it is that tarnish can enhance a surface to make it something grander than it was before.  On that note, let's look at resolutions:

The Empress's Resolutions for 2014:

1.  Be a better friend.
I think this is going to be a resolution for the rest of my life.  There is always room for improvement.

2.  Be more intentional about my career.
I've been sitting in a holding pattern that has largely consisted of waiting for life to be more stable.  Now, I haven't just waited - I am in school, and I am the mother of two children, one of whom is autistic.  I'm reasonably busy.  But if I'm going to call myself a writer, I need to start acting like it's my job.  Which means schedules, and due dates, and submitting my work to whomever is accepting as well as a number of people who aren't.

3.  Keep working on being less estranged from my family.
You may also recall this resolution from last year.  I put a bit of work into it, but not as much as I should have.  Time to get back in the saddle and all that.

4. Exercise, dammit!
This isn't even about weight loss.  I mean, yes, I need to lose weight, but this is just about how sitting on your rump all day isn't good for you.  I'm not talking about PX90 or Cross Fit or whatever other suicidal fad is out on the market.  I'm talking about taking walks, buying a bike, taking a class, and just getting myself out of this chair a few days a week. 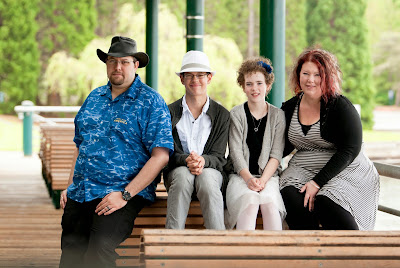