How much gel does it take to keep his hair like that?

As part of the holidays, Beasty got a new, larger monitor.  As such, his old but still impressive monitor was moved out to the family computer in the living room.  Now since it was larger, and since the old monitor was an odd size with a weird aspect ratio, I took it upon myself to find new wallpaper for it.  So I was looking on deviantArt, like you do, and I was hoping for something with swirly, stylized clouds.  I like them right now.  Something like this, only in different colors and a little more swirly.


What I found instead, was this guy. 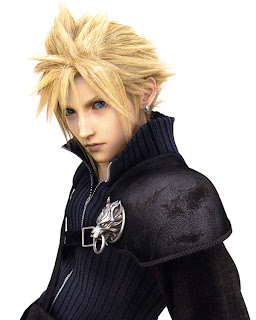 Over and over and over again.  In every possible light, angle, and pose.  In compromising positions with Sephiroth, Tidus, Squall, Seifer, and a few guys I didn't recognize.  It actually took a couple pages to get to the compromising positions with Aeris, Tifa, and Yuna (as depicted in FFX-2).  With and without the famous Buster Sword, with and without the bike, with and without a shirt in some cases.  I was eventually forced to shriek and rage quit.  Yes, you can rage quit looking for wallpaper.

Now, here is the deal my minions.  I have never understood the preoccupation with Cloud Strife, or with FFVII in general.  I'm not saying it's a bad game, I just don't understand the undying adoration it seems to have garnered.  And Advent Children didn't help - that movie was pretty awesome, but it was nearly ruined by whatever idiot they put in charge of sound editing.  Fight music cuts in randomly, whomever matched up the soundtrack to the action doesn't seem to have actually been watching the film, and while it's a beautifully rendered film with a good story I just can't bring myself to watch it again.  Once was enough with the cringe-worthy audio.  These are not traits that I would think inspire this level of fandom, but clearly I must be wrong.

I feel Scott Ramsoomair put it best.  I deeply and truly wish that man would update more often.
Posted by Unknown at 4:44 PM