Let me dust off this excuse right here...

So.  It's been a while.  How're you doing?  You look good.  I like the hair.  Are you doing something new with it?  What have you been up to lately?  Keeping busy?  Good, good.  Oh, me?  Well, I've had a lot going on.  The quarter just ended and it's been a little difficult.  How long ago?  Oh, ah, about a week or so back.  What have I been doing since then?  Saving the galaxy from the Reapers.

Yes, my minions, Beasty and I pre-ordered Mass Effect 3, the Collector's Edition.  And that is more or less all we've been doing since it arrived. 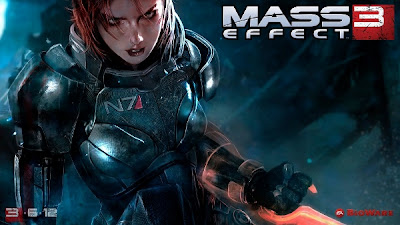 I love this series of games.  I mean, I really love them.  I have been impressed with the characterization, the voice acting, the writing, the visuals, all the things that I need to make a game stand out for me.  The game play mechanics are pretty good, too.  Not my usual cup of tea (I don't really go in for shooters of any kind), but I've never screamed at the controls either.  Thankfully I can typically get Beasty to play it for me and dictate decisions during the characters interactions.  That said, even though we have the entire series for the Xbox, I still intend to pick it up for the computer so that I can play around with all of the mods made for it and explore the ten potential love interests.  Well, all right, I won't explore all of them.  Just half of them.
Posted by Unknown at 1:07 AM

Email ThisBlogThis!Share to TwitterShare to FacebookShare to Pinterest
Labels: Gamer