You'll have to pardon the title, the beasty picked up Saints Row III (pre-ordered it, in fact) and has been playing it every day these last two weeks, so it may have had more than a little bit of an influence when I was constructing this post.  However, I feel it represents the atmosphere of what I'm about to share with you - strange, but with excitement.

So (much) later today, my home will be taken over by dear friends and a special out-of-town guest for what we have labeled in the past "Friend Thanksgiving".  Now, in truth, this is my only Thanksgiving.  Last night we had meatloaf with gravy, mashed potatoes, stuffing, broccoli, and pie. You must understand, my minions, that we really don't have any family out here, and to us the point of Thanksgiving is not just to eat lots of food, but to eat lots of food surrounded by people you love.  I come from a fair sized family, and until we moved out to the Pacific Northwest, was within a short drive of much of my mother's side of the family for all of my previous adult life.  Thanksgiving has always been a social event for me - that's what made it matter.

So, lacking local family, but understanding that our friends still have familial obligations on the day of, we decided to save our effort and host an event on Friday.  Now, all of that out of the way, let us get to the important part of this post.  The menu.

At last year's Thanksgiving I had decided to try something different and put together a meal based around dishes inspired by ingredients native to the Pacific Northwest (and it went over quite well, I am happy to say).  This year, when considering what to make, and keeping in mind that everyone would be having the standard fair the day before, I had a flash of inspiration.  So this year, using traditional ingredients, I've constructed an Asian Fusion menu.  Which I will now share with you.


I leave you with this teaser picture of the cupcakes, which I baked early and will frost today.  On Monday I'll post pictures and give full reports of how everything came out and tasted, etc and so forth. 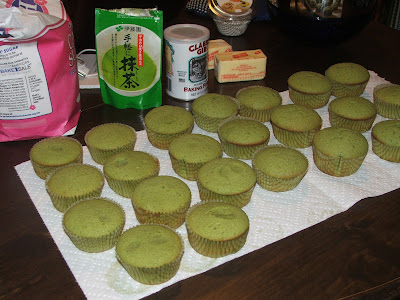 Email ThisBlogThis!Share to TwitterShare to FacebookShare to Pinterest
Labels: Foodie