Thoughts on Duke (and I don't mean John Wayne)

Another day, another rambling. 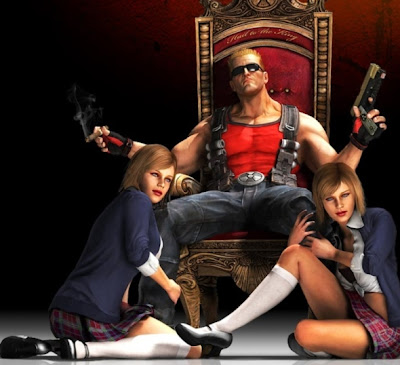 So take that in for a moment.  We have a man carved from a block of pure machismo, sitting on a throne that has "Hail to the King" written across the top in gold script (hard to read at this size, I know, the original image was quite large), with identical twins in slutty school girl uniforms clinging to him.  If this does not tell you everything you ever needed to know about Duke Nukem, you are charmingly naive and must tell me about the lovely secluded society you were raised in.
To say that there is objectification of women in Duke Nukem Forever is like pointing out that grass is green and the ocean has a few fish in it.  That is, for those of you who have issues with analogy, painfully obvious and a bit of an understatement.  The game reeks of it.  The male lead is a caricature of an all-American chauvinist pig.  Most of the time it's funny as hell, sometimes it crosses the line into retarded, and it offends a lot of people.
That said, I'm really tired of listening to women complain about the game.  My sisters - get over it.  No, really.  You knew exactly what you were signing up for when you picked up this title, and the fact that you're going on and on about how it's sexist and horrible leads me to hope that you never pass on your genes.  It's right up there with parents who buy rated M games for their children, then bring them back to the store angry because they're violent.  While I may not be a fan of the game, I have to admire that it has at no point tried to disguise what it is.  In fact, it has held it up like a blazing nuclear torch in the night.  Moreover, it is so comical, so absurd, so distant from reality.
Ladies, I implore you, save your rage for a cause that needs it.  This may make me a horrible feminist, but I believe that there are times when we have to stand up and fight, and there are times when we have to laugh at an absurd farce of a fantasy when we see one.  Use your influence to encourage games with strong female characters with full-coverage armor.  Vote with your dollars, get on forums, and push for positive change.  I want you to do all of these things!  And, for the love of all that is holy, don't buy a game and then throw screaming tantrums because it was exactly as advertised.
Posted by Unknown at 12:00 AM

Email ThisBlogThis!Share to TwitterShare to FacebookShare to Pinterest
Labels: Gamer